9 of Disks - Not a damsel in distress 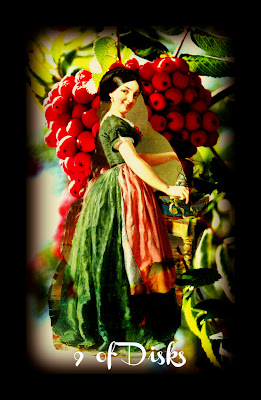 “I have not lived as a woman. I have lived as a man. I've just done what I damn well wanted to, and I've made enough money to support myself, and ain't afraid of being alone.” ― Katharine Hepburn


For the 9 of Disks (Venus in Virgo), I went with rather traditional imagery, minus the bird of prey. I wanted to show abundance but also someone in the process of achieving it. The young lady is preparing a meal in her kitchen. For someone doing the cooking, she's wearing quite fanciful clothes - as if to make the point that every day is a feast.

The colours of the painting made me think of rowan berries, so I went a found an image to fit. In Finnish mythology, Rowan is the mother of all plant life. It felt like the perfect match for a number nine (number of the Goddess) Earth Element card. Traditionally, rowan is used for protection spells - something a woman on her own may find herself in need of every now and again... especially if she has achieved a state of great abundance.

This is not the card of a person who has inherited wealth - this is someone who has used her gifts and talents to achieve abundance for herself and those in her care. However, nor is it a card of someone who has managed to accumulate wealth through hard work alone. The correspondence with Venus carries with it a sense of effortlessness, charm and grace. Think of a ballerina balancing, seemingly effortlessly, on the point of her toes... The key word being seemingly.

She deserves a standing ovation.