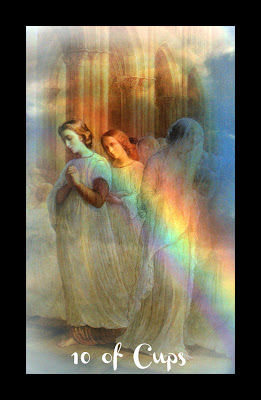 “In the end we shall have had enough of cynicism, skepticism and humbug, and we shall want to live more musically.” ― Vincent van Gogh


For the 10 of Cups (Mars in Pisces), I have chosen communion as the theme. This card can represent family, both in a physical and spiritual sense. Having Mars in Pisces myself and being very familiar with this energy from a life force point of view, communion seemed an obvious choice rather than traditional 'happy family' scene portrayed in Rider Waite style decks.


The rainbow combines the Fire of Mars with the Water of Pisces into a work of art, symbolic of creation itself. We are each but facets of Source, just as all colours of the rainbow emanate from the White Light. In communion, we get a taste of what it is like to be reunited in the bliss of Source as One, free of the illusion of separation.

To Mars in Pisces, nothing is mundane and especially not relationships. Mars in Pisces seeks a lyrical/artistic expression of the life force. Brutes need not apply and will not be tolerated.

The natural tendency of Mars in Pisces is to want to include everyone and the 10 of Cups type person is therefore a natural champion of the underdog. There can be no joy until all the stray sheep have been gathered in safely, nor until the last of the predators has been eliminated.

However, when it comes to standing up for oneself, the Mars in Pisces/10 of Cups type person may prefer to just quietly slip away and write a poem or paint something instead (Vincent Van Gogh had Mars in Pisces).