5 of Swords - Laika the Space Dog 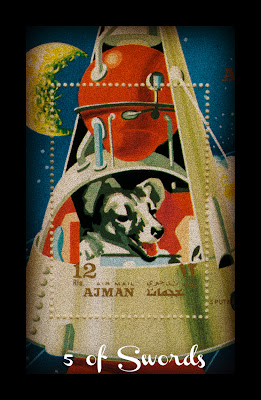 Laika (Russian for 'barker') was a stray dog that the Russian space scientists put into orbit around earth in 1957. They knowingly sent her to a certain death and the most likely cause of death overheating only hours after launch.

I chose Laika for the 5 of Swords because the experiment which involved sacrificing another sentient being in the name of scientific progress is a very 5 of Swords sort of thing to do.

Here we have Venus, Goddess of Love, in the easily detached Air Sign Aquarius (lover of science) and vibrating to the number 5 - a number of growth, progress, strife, competition and war.

This took place in the cold war era and the space race was on. What was the life of one little dog in the greater scheme of things?

I would say it was everything. Because by sending Laika to her certain death, these scientists denied their own humanity.