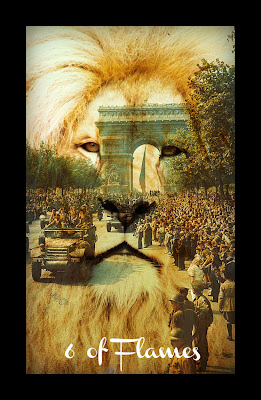 Showing off is the fool's idea of glory. ~ Bruce Lee

A victory parade is a common enough theme for the 6 of Flames/Wands (Jupiter in Leo). For this card, it felt right to go with a moment in human history to illustrate the transient nature of Victory. This transience is indicated by association with the sixth sephira on the middle pillar of the Kabbalistic Tree of Life.

All the 6's correspond to Tiphereth, the sephira of glory and splendour. But because of the polarity consciousness we find ourselves saturated with in the third dimension, we continue to stray from the 'middle path' to either side. Thus, nothing resonating with the splendour of Tiphereth lasts for long...

But wait! Have we not been promised a New Age? Are we not ascending into higher realms of consciousness which transcend duality? Yes we are, but it is not happening over night and we still need reminding that Tiphereth belongs to the meek. Nothing pushes us to the right or the left faster than pride, a concept very much inherent in the energy of Jupiter in Leo.

This was one of the easier cards to find inspiration for and I didn't have to search for long among the free public domain images to find exactly what I was after: An image of a lion's face and a picture of a victory parade. It's a bonus that the Arc de Triomphe is featured in the background since this is indeed a card of (temporary) triumph.