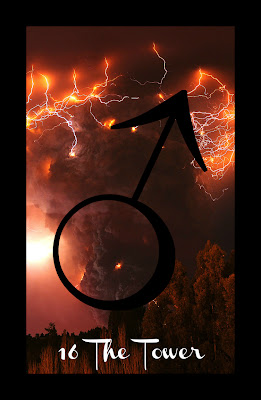 “Everything in the world is about sex except sex. Sex is about power.” ― Oscar Wilde

It could be argued that sex is about love but if the Tower spoke about sex, it would be in terms of Power. This is a purely, 100% male perspective, speaking from a place of too much testosterone rather than from the heart.
The planetary correspondence is Mars (God of War) and I have chosen to superimpose the planetary symbol onto the card image.

Quick to anger, the lessons the Tower brings us is to learn about personal power and how to align it with Higher Will. When we have mastered the Tower space we are not slow to anger, we have released the need for anger altogether.

I didn't have to think long and hard about what imagery to go with for the Arcturian Tarot - it was always going to be a volcano. I couldn't believe my luck when I found this image with a towering ash cloud, struck by lightning as this resembles the classical Rider Waite imagery but, it has to be said, is way more striking as it is Nature's own creation.